Subscribe to our newsletter and never miss any upcoming articles

Since my participation at the maiden PyCon Africa hosted in Ghana, Accra, I was so eager and moved to commit more of myself as a member / volunteer in the PyLadies Ghana community. The zeal, selflessness, sacrifice and ultimately hard work put in by the organizers of the community especially the PyLadies Ghana team led by Abigail Mesrenyame Dogbe inspired me to do more and stay connected.

You can imagine my alacrity when I saw the Movie Night post on social media in collaboration with HackLab Foundation, within some few minutes I had registered for the event and was wondering how it was going to be and how I could be of help. A day to the program, I was contacted by the team whether I will be present at the meeting, this was a form of check since many people tend to register for an event but due to unforeseen circumstances could not be there on the ‘D’ day. My response to the call was affirmative and I was requested to come an hour earlier to help in the organization of the movie night.

Subsequent to the Movie post on social media, I discovered the movie to be aired had already made it to my ‘Watched List’, so it kept me wondering how different would it be to watch it again as a community. I got super excited when I saw the movie will come along with popcorn, the whole cinema feeling? Of course, I will be there. This was my first ever Tech Movie Night and I was very expectant.

Saturday finally arrived and I arrived an hour earlier at the Stanbic Incubator located in Accra. Preparations had already started as ladies and men who support our initiative trooped in. I helped to get the room ready, which was settled for use, a while ago, as the prior venue was too big and didn’t have the “cinema feels”. Shortly after our guest speaker, Stephanie Sher came by. The few people around had the chance to share some views on the Chinese investments within Africa as she wanted to know our takes on it, before her introductory session. When the room was quite filled, our guest speaker proceeded to share her journey in the tech space, this inspired us and even sparked some innovative ideas, other members were working on. I got to take something along, which still resonates in my heart, that no matter the idea or project you are working, always reach out to people with in-depth knowledge and experience. You will be surprised how quickly and better you solve it. You know what they say “A problem shared is a problem halved”. 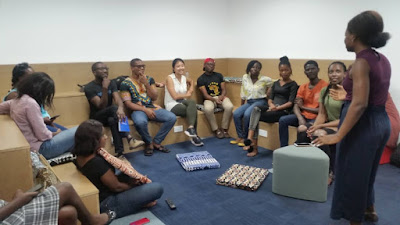 Next on our line-up of events was the showing of Hidden Figures with some pop-corn and ice-cream to go with. Throughout the movie, I felt goosebumps all over, like it was the first time seeing it. The movie tackled a story about a trio of African-American women, who were tagged as “COMPUTERS” whilst working in NASA. They contributed tremendously to getting the first man to space. Although they all faced setbacks, they took great strides to fight the status quo within the very system that seemed to be pressing them down, pushing back with their skill, talent and determination.

Hidden Figures serves as both entertaining and inspiring. It acknowledges from the beginning the racial divisions while insisting and portraying that “there is more than one way of killing a cat” – of fixing things. The ladies were fully aware of the racism that circled their lives but instead of resisting with violence and protests they asked for their rights with a sense of skill, grace, humility and patience. The movie depicted female empowerment which culminated in a discussion of such and the modern dose of feminism. At the end of the day the passion to be a change maker still continues. 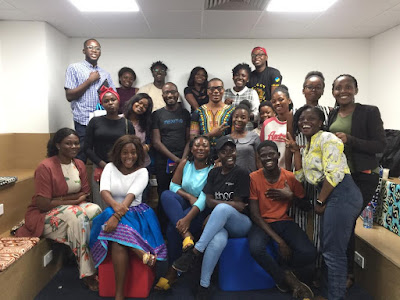 Big thanks to PyLadies Ghana and HackLab Foundation for putting up such an educative and interactive movie night. Another special thanks to Foster Awintiti Akugri and the SB Incubator for providing the venue. I am particularly looking forward to upcoming movie nights.

This blog was written by Yaa Nuamah Kusi-Fordjour