Subscribe to our newsletter and never miss any upcoming articles

Martha Teiko Teye is an Electrical and Electronic Engineering graduate from the University of Energy and Natural Resources. She is currently a backend developer/Junior Machine Learning Engineer at ZlitchTechnologies Limited.

She also has a nano degree in Front-End Web Development from Udacity and a Microsoft certification in Machine Learning. Martha appreciates the power of online communities/forums because they play a significant role in her programming journey. She volunteers to teach coding and mathematics in her free time, and loves to watch big bang theory, play chess, and toy blast.

Martha looks forward to pursuing a master's degree in the field of Computer Science or Machine Learning. Fun fact: She recently started reading and taking interest in comic books (because of Avengers). 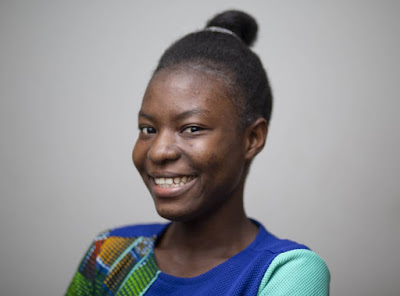 Tell us briefly about you. I personally think you're power-packed. Studying electrical engineering and all. How will you describe yourself aside from this?

I'm a tiny little lady who loves to take challenges. Quite troublesome but I think I'm cool.

How did your journey begin? When did you begin considering your field of study?

So growing up, I had wanted to become a surgeon. Even up to my final year in senior high school, it was still my dream. But after writing WASSCE I had the chance to use my dad's Vehicle diagnosing machine to detect some faults in cars and the way it worked fascinated me. That's when I got interested in the whole engineering thing.

So I now wanted to offer any engineering course I could get. At the time, KNUST was not admitting students with awaiting results so I either had to apply with the Nov Dec results I wrote before WASSCE. It nearly killed my dreams until I found the University of Energy and Natural Resources.

And that's how I ended up opting for Electrical Engineering.

For a dream you birth in only a few months, was it not hard settling in? How did you succeed at this?

It wasn't hard for me but I felt it was a relief. I love mathematics and realized that Engineering had a lot of maths components in it as compared to me trying very hard to appreciate biology in order to become a surgeon. I only felt a bit scared as people were against that sudden decision.

It did not take long to convince my dad since he is already in the field (he's a mechanic). So I just had to do study harder so as to fail in that regard.

Great. My lesson here is to find something you love and excel at and fuel it for success. You only ignited something you enjoyed. Aside from him, did you have any mentors?

Yeah. It was like magic. For the machine to tell you exactly where the faults were located. It was like a problem half solved.

So I had real mentors during my second year at the university. Dr. Mark Amo-Boateng and one other student who was my senior. That was when I actually got to know about this whole programming stuff and got interested.

How easy was it branching to coding?

For me, it was a little challenging. We offered C programming as a course in the second year. I really didn't get the concept well at that time. So I decided to re-study it during the vacation.

Was there any link between electrical engineering and your new love for machine learning?

Yeah, there was. I had an internship at the High-Performance Computing Center of UENR where Dr. Mark was the head.

He challenged me to first write an algorithm for fingerprint processing and then after, he introduced me to AI. It was really difficult. I had to go download codes online trying to understand. And some did not make sense to me at all. So I had to take the basic courses in AI so I could relate to those codes. We would stay up sometimes up to 2 am because he wanted me to figure things out myself. I was using Matlab by then and he advised that I did some python to be able to send data using web sockets to the web. I had not heard of that before so that was how I managed to learn most things.

Wow. The zeal is enviable. Learning is key. What AI and machine learning tools are you familiar with, and how proficient are you in them?

For ML, I use Azure ML. I've worked with Tensorflow and Natural Language Toolkit for the chat project I was working on.

What resources helped you grasp Python?

I mainly used tutorials point. Aside from that, I rely on posts and slack channels to learn new and trending stuff.

Are you able to freely ask questions without being intimidated? Especially in an open forum where you're scared, you may get ridiculed. It's a real hurdle for some of us.

I was scared of asking questions actually. I would prefer to spend all the time finding answers for myself. Three ladies with many gentlemen were quite tough. But they were really helpful. I appreciate them. Some of them never hesitated to teach us after lectures.

That got me to open up.

From what I've gathered, if your aim is growing into a successful coder, you need to know a lot of things. But, for Machine Learning & Data Science, it is pretty enough to master at least one coding language and use it confidently. How true is this?

Because we are Pythonistas, is Python a better option for solving machine learning problems? If yes, could you give us some reasons?

I would say Python too because just recently I took an ML course with Microsoft and they insisted we learnt R too but I realized that most of the codes were in python and just a little bit of R resources were used. Python also has a lot of libraries which makes things easier and is also quite simple to me.

Can you point us to sites where we can get resources that are understandable? There are many resources now. Figuring them out is harder than learning the whole thing.

True. I don't want to be biased here but I think for paid resources, Udacity and Microsoft VLIT are very welcoming. I like the way there's a project to complete after every module.

How's a typical day for you like at Zlitch technologies?

At Zlitch I am always on my PC. I do mostly backend stuff. So more of writing API's for most of our clients' work. Sometimes I write codes to sort out students' data for future predictions and analysis since most of our clients are schools. I work at any time of the day. Because we sleep at work.

This must be interesting. What do you do to stay on top of changing technologies?

Also do share your contact for those who will want to reach out for Mentoring, collaboration, and learning.

It's something I learned when I started creating my e-learning platform. I am using angular and started with angular 4 now we have angular 7 and things are not the same there.

Also, I could be reached via mail; martha.teye9@gmail.com or martha@zlitch.net

What advice will you give to a total beginner in programming?

For a beginner, I would say once you start, never stop practicing. Also, try and attend hackathons and conferences. At least there's one motivation you might take home with you.

And also one thing I forgot to mention. Volunteer.... Even if your knowledge is a little volunteer. I thank the organizers of Django girls because volunteering to coach actually taught me to do my first project using Django

How did you manage during your school days, I mean in the University, because I'm also in the University now, and I know in school you learn so many courses that are not even related to your field of study and most times lecturers give lots of crazy assignments here and there and presentations and at the end most times you spent a whole semester just like that, so tell me how did you cope with all this?

The truth is when I started staying up to debug my code instead of revising it, my grades started dropping. I was not bothered because it wasn't so much.

It is really difficult to combine the two. But I would advise you to make sure you keep your grades up whiles pursuing your programming passion. Perhaps you could create a timetable for both. Also, if you're in your final year, I would advise that you focus on finishing while trying to get links to study after school.

Is there anything you wish you had known or done better at the early stages of your journey?

I wish I had started learning programming at a very early stage. Even before I had to take that course in the second year. I would have been very proud of my achievements by now.

What's your approach to studying programming and how do you approach mentorship?

Initially, I was used to being taught something first before I would bother learning. But I've realized, that just by hearing someone talk about some nice technologies, you should be ready to read about what it entails and see how best you could apply it to what you already know. When studying programming you'd be tempted to try every language. But we should learn to be masters of some particular areas and then have the others as hobbies.

For mentorship, don’t wait for your mentor to tell you what to do next. Try and be inquisitive. I've mentored a few girls and I realized they had the same problem I had before. Being scared to ask questions.

How do you balance social life and work?

My social life is boring, (Aside from playing games and going to church) so work takes the majority of my time. I'm not the going out and having lots of friends type.

How many hours were you dedicated to learning to code when you were a novice?

I used to have tutorials from 9 pm to 12 am and spend the rest of the time trying to do an assignment if my tutor gave me one. And then sleep afterward to prepare for lectures the next day. This happened for one year until my tutor graduated.

I loved the session. It was beyond awesome! ~ Jida Asare

Martha, you're an inspiration. Really proud of you. ~ Gina

You're a gem and your work is amazing, I'm inspired to do more. ~ Edinam